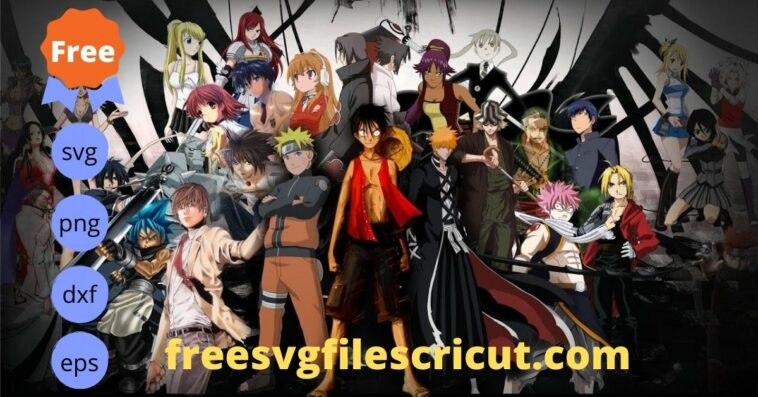 If you are a huge fan of Japanese anime and manga, or just a girl/boy who loves anime, do not miss this Anime SVG Collection!

Anime is something that is very close to many people. From famous anime series like One Piece, Naruto, Bleach, Demon Slayer, Haikyuu to brand new anime series, you can never get bored while watching anime because the storyline is so unique and different from what we usually see in movies and tv shows. Not only that, the best part about anime is that it not only entertains you because you also learn so much about life in a very fascinating manner. You understand the true meaning of love, friendship, sacrifice, and other good values of life.

Now, let’s find out which Anime SVG Designs you must have for your Cricut and Silhouette Project.

All anime lovers out there might have indeed watched the famous anime series, Attack on Titan, right? Well, its gripping story and stunning animation are what made it one of the most-watched anime, all over the world. In fact, characters like Eren Yeager, Levi Ackerman, and others are adored by the fans. Well, irrespective of the fact that Zeke Yeager is an antagonist, he is one of the most interesting characters of the show. And if you are also attracted by this character, let’s grab this Zeke Yeager Svg right away.

Yuji Itadori is the beloved protagonist of Jujutsu Kaisen. Even though he was forced into the world of jujutsu sorcery after swallowing one of Sukuna’s fingers, Yuji faced all of the challenges ahead of him with unmatched bravery and optimism. Yuji is a shonen protagonist unlike any other, and it’s part of the reason why the series is so successful.

As a fan of Jujutsu Kaisen, do not wait to get this Anime Svg design. You can use it for home decor, wall decals, T-shirts, customized mugs, tumblers, door signs, cards, ornaments, or any other purposes!

In terms of One Piece characters, Monkey D. Luffy, the captain of the Straw Hat Pirates, certainly gets one of the top spots in every category imaginable. The cheerful and resilient boy who wants to become the best pirate in the world has, since his debut, become one of the most popular and best-known anime and manga characters in history.

Looking for stunning One Piece Luffy Svg for your project or just to make some gifts for your friends who are crazy about Anime One Piece, let’s grab this design right now

Everyone who has watched or read ‘Naruto’ will know that Uchiha Itachi is one of the best anime characters of all time. His strength and surprising storyline captivated fans from the start of the series. Itachi Uchiha sure did die a terrible death but neither his life nor death was meaningless. He showed us how far big brothers can go, taught us the importance of friendship and changed many lives. If you are crazy about him, don’t miss this Free Uchiha Itachi Cartoon Svg

This Itachi Uchiha Svg is perfect for making stickers, t-shirt, mugs, pins or whatever else your imagination suggests.

Naruto is, without a doubt, one of the best anime of all time! One of the biggest reasons why it touched more hearts than a doctor’s is because of its grounded and realistic presentation of emotions. And certainly Naruto is the most loved character. Not only because of his cheerful and energetic personality, but Naruto is also known as the person who always overcomes all difficulties and adversities to be able to become a Hokage of Konoha village. As a fan of Naruto, do not miss this cute svg file.

You can use this Anime Manga Svg to print on many things such as t-shirts, mugs, hoodies, gowns, canvas by using cutting machines such as Cricut and Silhouette Cameo machines.

The anime series “Demon Slayer: Kimetsu no Yaiba” officially ended in 2019. However, fans didn’t forget about their favorite show and, of course, their beloved central character Kamado Tanjiro. He is known for being a responsible and compassionate elder brother. His warm nature knows no bounds which made him a fan favourite even among small children!

A big fan of Tanjiro should never leave aside this awesome Tanjiro Kamado Svg. This svg cut file can be use for wall decals, T-shirts, customized mugs, tumblers, vinyl decals, stickers, or whatever you want.

These are some of the best Anime SVG Files that anime fans might not want to miss!

And if you find it helpful and love it, please give us a share or pin!

Thank you so much and have a nice day! 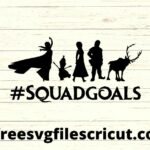 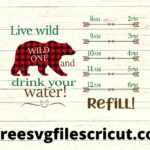 You, the user, is solely responsible for determining if phrases used in any designs are trademarked or have any legal limitations for your intended usage.

Don’t miss out on new posts!